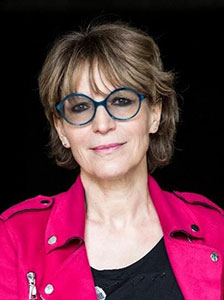 Dr Agnès Callamard is Secretary General at Amnesty International. She leads the organization’s human rights work and is its chief spokesperson.

She is responsible for providing overall leadership of the International Secretariat, including setting the strategic direction for the organisation and managing relations with Amnesty International’s national entities.

Agnès has been a prominent figure in the human rights world for decades.

In 2016, she was appointed as the United Nations Special Rapporteur on extra-judicial, summary or arbitrary killings. Along with her UN work, Agnès was also the Director of Global Freedom of Expression at Columbia University in New York.

Previously she was Executive Director of the freedom of expression organization Article 19.

She returns to Amnesty after twenty years having previously held the role of Chef de Cabinet for then Secretary General Pierre Sané.

As a leading advocate for freedom of expression, a feminist and an anti-racism activist, she pushes out the frontiers of rights through her scholarship and advocacy.