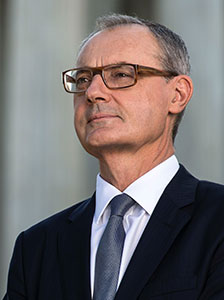 David O’Sullivan served as Ambassador of the European Union Delegation to the United States from November 2014 until February 2019.

Prior to his appointment as Ambassador, he was the Chief Operating Officer of the EU’s new diplomatic service, the ‘European External Action Service’. He had previously held a number senior positions within the European Commission include Director General for Trade (2005-2010); Secretary General of the European Commission (2000-2005); and Chief of Staff to Commission President Romano Prodi (1999-2000). Before joining the Commission, he started his career with the Irish Department of Foreign Affairs and Trade (1977-1979).

He is a graduate of Trinity College, Dublin and the College of Europe (Bruges), and holds Honorary Doctorates from the Dublin Institute of Technology and Trinity College Dublin. He was awarded the EU Transatlantic Business Award by the American Chamber of Commerce in 2014.

In November 2019, he joined the Brussels office of the law firm of Steptoe and Johnson LLP as a Senior Counsellor.